“She likes how he blogs, her texts turn him on. It’s intense. For right now.”

It seems Calvin Klein has hit on a trendy new way of marketing fragrance to target “the hip 20-somethings of the MySpace generation”.

According the the Sydney Morning Herald,

“We have envisioned this as the first fragrance for the technosexual generation,” CK president Tom Murray told The New York Times.

It represents a revised image for Calvin Klein, which has struggled to maintain its youth appeal after the company was sold to Phillips-Van Heusen in 2002.

The cylindrical white plastic and glass bottles - the brainchild of famed New York designer Stephen Burks - clearly draw inspiration from the iPod, which itself has become a generation Y icon.

The fragrance’s creator, Ann Gottlieb, described it to The New York Times as being a “spontaneous and seductive” sequel to the ’90s grunge youth hit CK One.

That philosophy is mirrored in its marketing material; a magazine ad for “in2u” shows a male and female model leaning against a wall - he grabs a handful of her hair while she tugs on his unfastened belt. 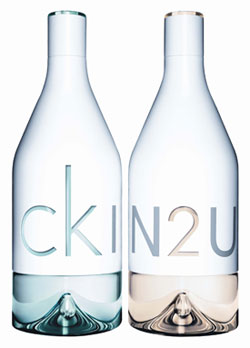 Since I am doing a semiotic study of perfume right now, let’s look at the notes:

hmmm… some of those notes sound somewhat…. errrr pretentious? What is ultra-vetiver? I had to look it up to find out that it was a grass, and that “the odor of vetiver oil is described as deep, sweet, woody, smoky, earthy, amber, balsam.” Ahhh well that makes sense now. Woody is an actual note. Ultra-woody? Ummm is that a top note or a base note?

When I was in France I went to the Parfumerie Fragonard and learnt that the person who composes perfume is called a “Nose” and that they can recognise up to 3000 distinct smells. Here’s a pic of a nose at work.

What is interesting is that perfume has always been equally as much about culture and society as it has the scent:

The ability to distinguish olfactory notes with a mere sniff is not enough to create a perfume that will remain famous. It also requires a sensitivity for the mood of the day, as was the case for Shalimar by Guerlain, created in 1925, or, more recently, for Opium (1977) by Yves Saint Laurent and Poison (1985) by Dior. Nowadays, perfumes are more startling, such as L’Eau d’Issey by Miyaké, with its pronounced marine touch. Or more discreet, for young girls, such as Eden by Chanel. In most cases, as in fashions or in any artistic creation, success comes from the chance encounter between the public and a certain sensitivity. For that, the perfume must also correspond to the brand name that launches it and comply with its image luxury, youth, sensuality, mystery, originality. There must be total coherence between the perfume, its bottle and the image they convey.

I think CK’s in2u hits some of the mark but ummmm its not really very mysterious, is it? But then again, in an age where its commonplace to reveal your innermost secrets on your blog, perhaps the marketing is spot on?